SERVING THE BUILDING SECTOR SINCE 1931 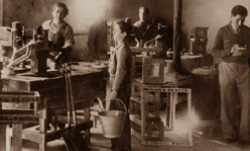 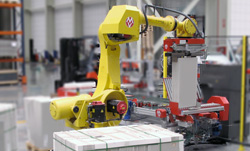 When MIQUEL PLANAS PUJADAS first set up MOSAICS PLANAS, SA in 1931, he started by producing hydraulic mosaic, a truly artisan craft of that time. Despite being extremely painstaking and complex, this type of production became known for its design, quality and perfection.
This is how the Planas mosaics earned the seal of distinction that their creator incorporated into them.

The industrial sector underwent great progress, and with it came a new age of growth, expansion and industrialisation: this was the decade of the nineteen-sixties. Terrazzo tiles became popular.  Although they involved a completely different style of fabrication, they continued to conserve the innovative, high-quality traits that constitute our company’s hallmark. ANTONIO COSTA MASSÓ, managing director of the company at that time, succeeded in making the Planas name known outside our borders, and even today, Planas terrazzo tiles can still be found in many buildings, with all the quality they had when they were first laid. One of his favourite phrases was: “The terrazzo tiles of Can Planas are made with cement!!”

The company’s evolution led us to enter the natural stone market, in which we have exported our products to all parts of the world, cooperating with the best architects and real estate developers and builders.